skip to main | skip to sidebar

Malaysia being a tropical country is blessed with many forests that have enabled the timber industry to thrive. Woodcarving of various forms and patterns is one of the classical Malaysian art that is still growing today. In general, the type of wood that are used in wood carvings are Chengal, Merbau, Ngatoh and Jelutong. These woods are found in the forest of Malaysia. As this resources began to diminish due to the world wide demand for timber, efforts have been put in to re-plant trees that had been felled.

The woodcarvings pattern of chairs, tables, racks and other household product are the most populer to malaysian as a decorative a items.
Chengal wood came from the tree with botanical name Neobalanocarpus Heimii. The tree grows best on undulating land with light sandy soils though it can be found in various terrains of Malaysia. The wood is light yellow brown with a distinct greenish tinge when freshly sawn but became dark purple-brown or rust red on exposure. Its grain is in locked with a fine and even texture. As the wood is hard and durable, it is used for the construction of boats, bridges, lorry body work, marine construction and also in carving work.
Merbau wood came from the tree with botanical name Intsia Bijuga. The tree grows in the lowland tropical rainforest near the mangrove swamps, rivers or floodplains. Merbau is a very durable and termite-resistant wood which makes it a highly sought after material for flooring
and other usage. The wood is also used to extract a dye. The bark and leaves are used in traditional medicine.

Nyatoh wood came from the family of Sapotaceae. The tree can grow up to 100 feet or more with a trunk diameters up to 3 feet. The heartwood varies from pale pink to red brown. The sapwood is lighter in colour. It has a sour smell when freshly milled. In general, Nyatoh wood has a low resistance to termite attack. It is used in the making of furniture, plywood and in general utility wood.
Jelutong wood came from the tree with botanical name Dyera Costulata. It grows well in low-elevation tropical evergreen forest. The tree can grow up to 200 feet with diameters up to 6 feet. Its timber is used in the making of furniture, wood carving and other wood work. The roots are used as a cork substitute and its latex was an important source of chewing gum in the nineties. The tree is grown commercially for timber. 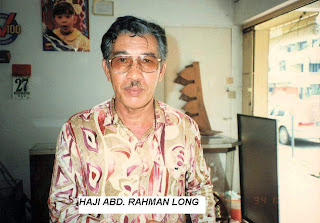 As far back as seven generations, Encik Long bin Yusoff's family can be proud to be known as the premier family of wood-carvers in the entire state of Terengganu if not Malaysia. His family's skills are not limited to carving only, but also extend to constructing ornate homes, palaces and furniture. The knowledge and skills in the fine art of wood-carving flowed through generations of Long's family, with roots from Pattani in South Thailand. Samples of these high quality handiwork are physical evidence of their work. The expertise of Encik Long reached the ears of royalty who commissioned him to decorate their palaces. They were not disappointed.
He was known as a court craftsman with multiple talents which included the ability to make furniture, sail boats, sedan chairs and weapons.
Encik Long passed away taking with him his experience as a wood-carver. He lived up to the edge of 120, a lifespan quite rare in those days, and even today, while contributing to society through his art form. He passed on his knowledge and skills to his sons who continued the interest in wood-carving. In Long family, wood carving traditions live on. The current generation of the family turned the art form into an industry, taking bulk orders.
Today, Haji Abdul Rahman Long is no stranger to wood-carving enthusiasts. He has been active in quantity production making decorative pieces for palaces, mosques, government offices, banks, private agencies and hotels all around Malaysia and neighboring nations such as Singapore and Brunei Darussalam. He operates from Batu 1 3/4, Jalan Pengkalan Chepa, Kota Bharu under the name of 'Pakatan Juru Ukir Tradisional'. With the cooperation of the Kelantan State Government and the museum he started active operations in 1973. Recently he opened a branch workshop at Kampung Sentosa, Pengkalan Nyireh in Besut, Terengganu, in order to service the ever-increasing demands.
It is safe to say that he is the first person to commercialize the wood carving industry in Malaysia (during the 70's) when the arts of wood-carving was fading away. Since then he has groomed a new generation of wood-carvers, hence saving this art form from extinction. Today, most of the wood- carving companies and individuals, particularly those operating in Kelantan and Terengganu (both states are known for wood-carving activities) were trained and groomed by him.
He has made it possible for local society to adorn their homes and public places with beautiful, traditional wood-carvings. He also acknowledges that there is an ever increasing interest and appreciation of wood-carvings especially with improving economic conditions. Fine intricate wood-carvings are no longer confined to palaces or the upper echelons of society, but can be found on doors, windows and walls of houses of any individual who values their beauty.
He works closely with Malaysian Handicrafts (Perbadanan Kemajuan Kraftangan Malaysia) and MTIB (Malaysian Timber Industry Board) as well as Malaysian Forest Department (Jabatan Perhutanan Malaysia). This is to ensure a sustainable future of this ancient art.
Part of his effort is to educate and share knowledge on the art of wood carving, he always welcomes students and scholars who want to study the subject. 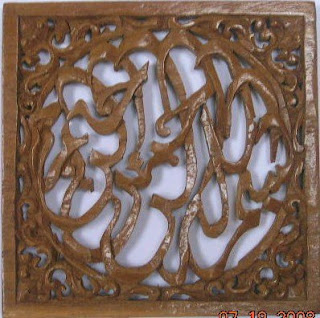 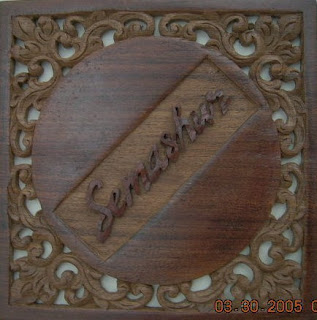 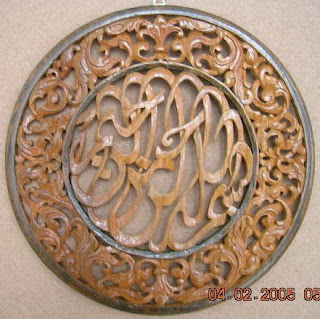 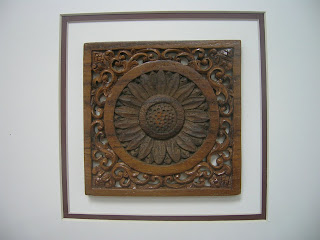 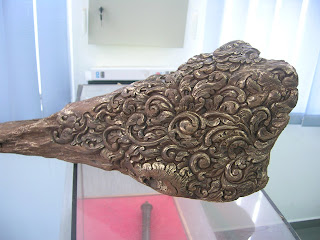 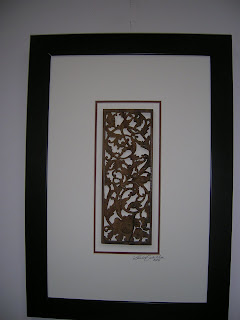 Posted by bakrie at 6:44 AM No comments: 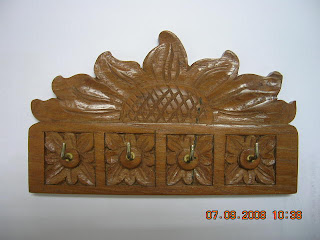 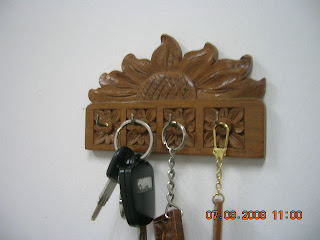 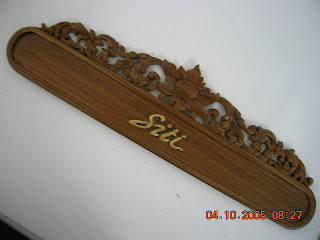 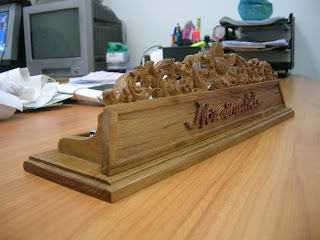 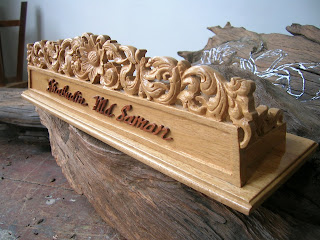 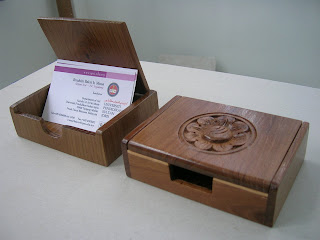 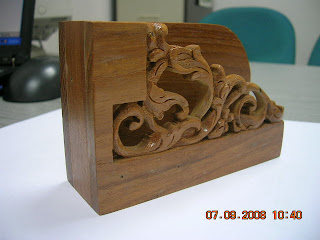 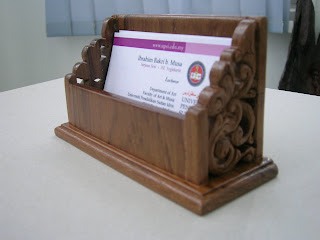 Posted by bakrie at 9:40 PM No comments: